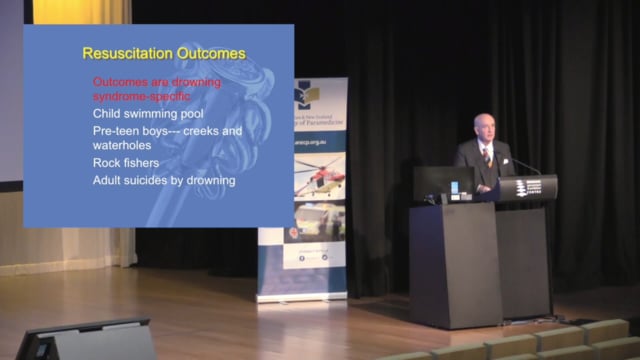 Presented by Professor John Pearn Responding to an emergency call for a drowning casualty is one of the most distressing encounters for all involved in a rescue, in assisting an extraction from the water, or during cardiopulmonary resuscitation.

Our research has shown that the chance of achieving a successful resuscitation depends on several factors, including the age of the casualty; site of drowning; initial bystander first aid; and a miscellany of other factors ranging from suicidal intent to prior alcohol and drug ingestion. Water temperature and water osmolality (salt or fresh water) is of no consequence in Australian and New Zealand conditions. The most significant factor is submersion duration, a factor never known with certainty in individual cases. The most successful predictor for resuscitation success, in the management of an apnoeic and pulseless casualty, is the time to first spontaneous gasp.

In the case of preschool children drowning in proximate water hazards, the chance of a successful “save” is better than 50 percent, and better than 70 percent if bystander CPR is commenced as soon as extraction from the water is effected. For those surviving, the outlook is statistically very good, with 95 percent of such survivors having an intact neurological outcome.

Professor John Pearn is the senior paediatrician at the Lady Cilento Children’s Hospital in Brisbane. He has an extensive research and publication record in the domain of trauma and its prevention and management. This work has involved studies of drowning, road trauma, dog bites, horse-riding injuries, plant toxicity and envenomation by snakes, ticks and spiders. In a second career he has served as a doctor-soldier on active service in Papua New Guinea, Vietnam and post-genocide Rwanda (1994-1995) as a specialist physician and intensivist.

As Major General John Pearn he served for three years as Surgeon General of the Australian Defence Force. He has been privileged to serve in a series of educational, consulting and support roles in ambulance services; and is the Patron of the KJMcPherson Education and Research Foundation of the Queensland Ambulance Service. He has served for 24 years on the Australian Resuscitation Council and for the past eight years as a member of the Medical Committee of the International Life Saving Federation. For his services to rescue, resuscitation, lifesaving, injury prevention and safety promotion, he was awarded the King Edward VII Cup by Her Majesty, Queen Elizabeth, at Buckingham palace in November 2016.