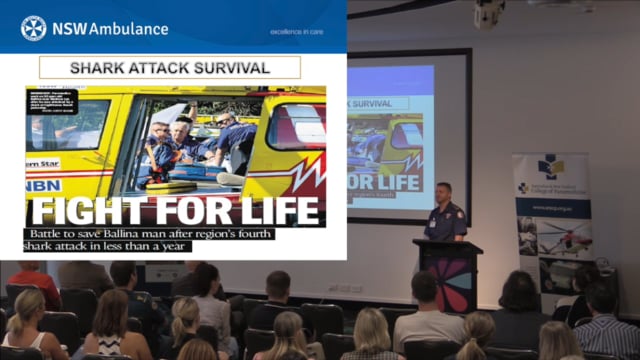 Case study of Matt Lee, the 34year old body board rider who was mauled by a shark at Ballina in February 2015. The case study will outline the circumstances and challenges that were encountered, and the pre-hospital management. A brief analysis of overcoming some of the situational challenges, and the factors that contributed to Mr. Lee’s amazing survival to hospital.

Ian Murphy is an Intensive Care Paramedic and Station Manager at Ballina Ambulance Station on the north coast of NSW. He has been a paramedic with NSW Ambulance since 2001, and an ICP since 2006. His pre-hospital clinical experience includes many years in inner-city Sydney, as well as paramedic crewing on the Lismore Westpac Lifesaver Rescue helicopter from 2012-2014. He has previously also been ICP Station Manager for Narrabri Ambulance Station in north-west NSW, as well as briefly working in Sydney and Dubbo Ambulance Control Centres.