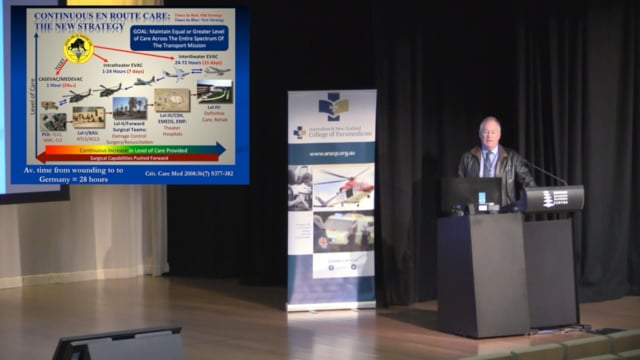 Presented by Dr David Cooksley Nine out of every 10 contemporary battlefield deaths occur prior to reaching a medical treatment facility and almost a quarter of those may be preventable with better pre-hospital care.  The British military ‘Medical Emergency Response Team’ (MERT) was developed to provide extremely aggressive and capable pre-hospital care and transport to injured or ill soldiers.  The MERT capability remains unmatched by any other military or civilian service in the world.  This presentation will discuss the rationale for, and training, application and outcomes of, the British MERT in Afghanistan.

David is an experienced emergency and retrieval physician and medical officer with the RAAF Specialist Reserve.  He is the RAAF 'Principal ‘Military Critical care Aeromedical Transport’ (MCAT) Medical Officer Instructor' and is the only person from the southern hemisphere to have undertaken and passed the British military ‘Medical Emergency Response Team’ (MERT) training.  David has worked for a number of pre-hospital/retrieval services including the London HEMS.  He has deployed on military activities to Afghanistan and other parts of the world with the Australian Defence Force and the US military.