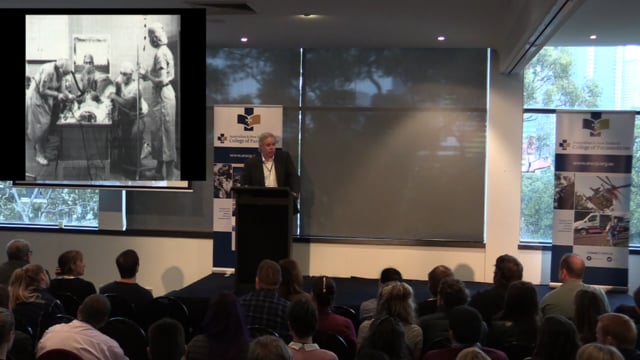 Presented by Professor Stephen Bernard Presentation Synopsis: Most victims of acute traumatic SCI are young (15-50 years) and the majority have severe paralysis and permanent functional deficits with ongoing complex social, psychological and medical needs. At present there is no specific treatment for patients with acute spinal cord injury. However, it is known that physical injury to the spinal cord occurs not just at the time of impact, but also results from continued compression of the spinal cord as a consequence of the displaced vertebra. Animal and preliminary human data demonstrate that urgent relief of this compression appears to greatly improve outcome. However, early decompression in humans is difficult to achieve because of the time occupied by transportation, investigation, and stabilisation of the patient as well as the organisation of surgery. Pre-clinical data demonstrate that mild therapeutic hypothermia can suspend the progressive damage caused to the spinal cord by compression thereby allowing decompression surgery to be performed in a clinically achievable time frame. A clinical trial of Immediate Cooling followed by Emergency Decompression (ICED) is planned to determine whether the combination of immediate therapeutic hypothermia and early decompression is able to improve outcomes in patients with severe spinal cord injuries of the neck. Patients with suspected cervical spinal cord injury will be cooled by paramedics immediately following injury and then rapidly transported to theatre to undergo surgical decompression and stabilisation of the spinal cord. Patients will then be slowly re-warmed after 24 hours. The ICED study is a preliminary clinical trial will determine whether it is possible to cool patients with spinal cord injuries resulting from vertebral trauma in the neck immediately after injury and then operate on patients very early after injury.

Bio: Professor Stephen Bernard is Director of Intensive Care at Knox Private Hospital, Honorary Senior Intensive Care Specialist at The Alfred, and the Senior Medical Advisor to Ambulance Victoria. He is Adjunct Professor at the Monash University Department of Epidemiology and Preventive Medicine.

He is involved in a number of clinical trials funded by the NHMRC. These include: “EXACT” which tests reduction of oxygen administration after resuscitation from cardiac arrest, “PATCH” which tests the role of a blood clotting drug (tranexamic acid) in severe trauma, “POLAR” which tests early therapeutic hypothermia in severe traumatic brain injury, and “ICED” which will test early therapeutic hypothermia in patients with spinal cord injury. He is also a Chief Investigator in the NHMRC funded Centre for Research Excellence – The Australian Resuscitation Outcomes Consortium (AUS-ROC) which is currently undertaking a comprehensive research program in epidemiology and treatment of patients with out-of-hospital cardiac arrest.